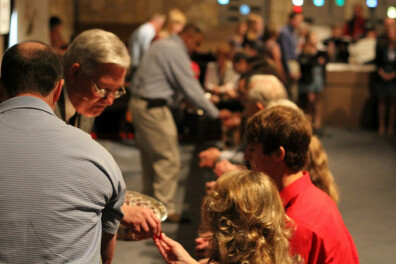 What is Holy Communion?

It is the true body and blood of our Lord Jesus Christ under the bread and wine, given to us Christians to eat and drink, as it was instituted by Christ himself.

Where is this written?

Our Lord Jesus Christ, on the night in which he was betrayed, took bread, and when he had given thanks, he broke it and gave it to his disciples saying:

Take and eat, this is my body, which is given for you.

Do this in remembrance of me.

Again, after supper he took the cup, gave thanks, and gave it to them, saying:

Take and drink of it, all of you.

This cup is the new testament in my blood,

which is shed for you and for many for the forgiveness of sins.

Do this, as often as you drink it, in remembrance of me.

What is the benefit of such eating and drinking?

How can the bodily eating and drinking produce such great benefits?

When is a person worthy to receive the Sacrament?

Fasting and other outward disciplines are indeed good preparation, but people are truly worthy and well prepared who believe these words, "Given and shed for you for the forgiveness of sins." But those who do not believe these words or who doubt them are unworthy and unprepared, for the words "for you" require truly believing hearts.